When CFANS alumnus Garrett McCormick (B.S. Food Systems, 2015) was just fourteen, he began taking probiotics and noticed a big change in how he felt: he had more energy and he was ill less frequently. Years later, after meeting Amanda Pederson (B.S. Nutrition, 2016) in a cooking class at the University of Minnesota, they turned this insight into their careers. 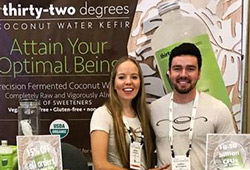 they sell coconut water kefir. Kefir is a fermented beverage that typically contains milk products. Coconut water kefir, on the other hand, is “vegan, soy and gluten-free, and contains more probiotics in a few drops than can be counted on one-hundred million hands,” according to the thirty-two degrees website.

The idea was sparked when the pair was making coconut water kefir in their home kitchen and realized there wasn’t a readily available organic option. So, they developed their own coconut water kefir that uses organic coconuts, contains no added sugars, and is jam-packed with probiotics.

Pederson majored in nutrition at the U, while McCormick majored in food systems. Since probiotics is a newer field, neither of them received much exposure to the topic in their curriculum. However, their college experiences exposed them to a variety of interesting courses, helped them refine their interests, and get jobs after graduating. According to McCormick, the food systems major helped him realize his affinity for natural foods, a subject full of potential not only for personal health, but for business as well.

McCormick notes that during college, he noticed a common, negative worldview. “The overall narrative I experienced [was]... You go from high school, to college, to career, and then you spend the rest of your life miserable in your office chair.”

Pederson also experienced this confining view during college. “I picked nutrition, and then [people were] like, well, what are you going to do with that? You can either be a dietitian, or you can work in a hospital. Then I started realizing that there are other things you can do, too.”

Before she realized this, Pederson was working in what she referred to as an unfulfilling corporate job after college, as was McCormick. As Pederson puts it, she had to find another way to be happy.

Launching the company was not without its difficulties. Some challenges the pair faced included time management while they both had other jobs, as well as learning the etiquette of professional communication with different groups of people.

“There has to be some means to get to where you want to be; [you can’t] snap your fingers and have everything be perfect,” McCormick says. “[But] I think if you put your head down and work, you will end up where you’re supposed to be.”

For more information about McCormick and Pederson’s story and their company, thirty-two degrees, visit: www.thirtytwoprobiotics.com